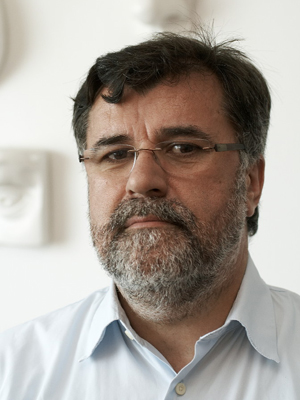 With the establishment of “Rex” you came into contact with Jewish culture, with Dorćol. You also made an exhibition titled “Jews: The Neighbors Who Are No More,” and after that a documentary about Staro Sajmište. Did you have an earlier personal contact with this topic?

There is no hypersensitivity for the Jewish question per se. In this case, there is hypersensitivity towards evil, destruction, annihilation, i.e. violence. This is something which had intrigued me earlier, when I began as a journalist. So, in a general, this is a topic which is very important to me, a topic which is boundless and which has for years and centuries controlled processes in the world. With the beginning of the Yugoslav wars, this theme was only strengthened, and I saw repeated patterns from previous historical events. I understood that we are constantly repeating the same mistakes, and that they are repeated only because we do not have enough knowledge of our history and world history concerning violence. That is one of the reasons I have directed much attention in that direction, wishing to speak about current events by remembering similar, important events from the past. So that is how I came to “Rex,” the Jewish community and the first exhibitions etc. My intent was to transform the  ignorance into collective knowledge, which would as parallel to current events become a politically direct message and help the evolution of antiwar sentiment in this area.

Could you give us your view of the political and media landscape around Staro Sajmište nowadays and in recent years?

Sajmište itself and the Holocaust have been ignored for years. After WWII, the motives regularly changed because of short-term politics, which is why the importance of this place has been neglected. The Holocaust which happened in Sajmište - it is the most convincing area where the Holocaust happened in Serbia - is something which the previous Jewish community did not want to have any connections with - I am referring to Tito’s time - because they did not want to emphasize that there was a Holocaust in Yugoslavia, so that one nation would not emphasize itself, in this case, the Jews. “Brotherhood and Unity” was the slogan then, and it also implied that there should be “Brotherhood and Unity” on the part of the WWII victims.

The other reason is that relations towards the Jewish community immediately after the war were very bad, and many Jews immigrated to Israel. A small community was left and they could not bring this question on to the daily agenda. The third reason is that the Serbian nationalism did not want to accept that there existed a very serious Quisling government which collaborated with the Germans, even minimally, in the Holocaust. So, there is a whole pleiad of reasons and this last one has been dominant in the past twenty five years, since the rise of Serbian nationalism, even though there is an effort on its part to identify ourselves as victims, like the Jews, with the establishment of organizations of Serbian-Jewish friendship. But the real questions never came into view, only short-term political ones. These societies only dabbled in contemporary politics and proving their validity, instead of the important questions of remembering the Holocaust, developing non-violence. These organizations played a complete opposite role; the Jewish question and Holocaust were practically abused.

Please tell us about the Museum of Tolerance and the whole project for Staro Sajmište, since you mentioned in previous interviews the various contents which would be included as part of the project and Memorial Center: an educational center, the Museum of Tolerance, exhibition areas, content for the youth. How is the preparation for this project progressing?

We have already planned out programs for the next ten years for this future complex, because the goal is to acquaint the citizens of Belgrade and Serbia with all the kinds and forms of violence through which world society, the world community, has passed. On the other hand, it is evident that there must be a Holocaust museum. The Jewish museum has documents and artifacts concerning Staro Sajmište, which could be used as part of the permanent exhibition there. Another exhibition which is very important, is the museum of the concentration camp Staro Sajmište. This is not at all that complicated. It is important that the city and the state understand that such a complex should be used as a pilgrimage site, where people will come for a whole afternoon; a place which will have not only memorial, but also cultural content, which will serve an educational purpose, promoting non-violence and tolerance.

The greater problem is to create the political will to open the place to the public. There exist a few buildings which were occupied after WWII, and I have been leading a political fight and lobbying with the current government from the city level to the President. Everyone is for such a project, but only during the past few months has there been enough energy to make things happen. I hope that in a few weeks time - the mayor gave me his promise - there will be formed a commission for Staro Sajmište, which will be responsible for planning out the area and resettling the current inhabitants. First, it should consider all problems connected to Staro Sajmište, how to resettle the people and reconstruct the buildings. The easiest building to resettle is the Italian pavilion, which has only a few tenants. I think it belongs to the Association of Visual Artists, and the city government can come to an agreement with them and give them another building. I think there is only one family which is there illegally. It is the easiest building to reconstruct and put into working order as a Memorial Center, which would be the hub of the future complex. The next building, which it is important to clear out for safety reasons, is the Central Tower: There are between sixteen and eighteen families there, and it is necessary to find ateliers or other buildings fit for accommodation. The greatest problem is that the people who have received ateliers there have turned them into apartments, so they will ask for apartments in return, which will cause lots of headaches for the city government. I suggested that the Ministry of Justice gets involved in this action, since it currently has confiscated mafia property at its disposal, which could be used efficiently for resettling these people. There also exist a lawsuit over a certain café which is situated in part of the Turkish pavilion. It was established there two years ago, even though I warned the government that such a thing would happen. The municipality of New Belgrade annulled the contract with that café, but it still exists.

You mean “Salt and Pepper”? Behind the memorial plaque?

Yes, right next to Poseidon. Which is the most complex problem of all. It was privatized under certain conditions, so it will be difficult to acquire for the complex. The city government would have to separate substantial compensation for this building. If it were to happen, we would immediately have a great exhibition area. The greatest problem is also the barracks next to Sajmište, which were illegally built and are not adequate for living, since they have no canalization. Once they solve that problem, we would have a swath of area from the Old Bridge towards the Museum of Modern Art, which would be a serious complex of historical and architectural value, since Sajmište was built in 1937 as a modern architectural complex. To sum up, the meaning of such a complex would not only be memorial, but also cultural, and it would give the citizens of Serbia and tourists a strong message of what happened there in the past.