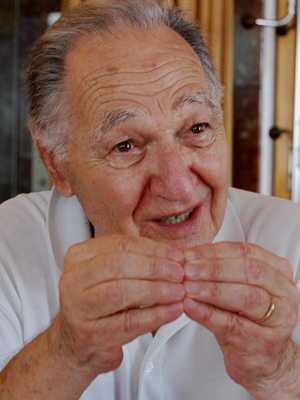 When did you start focusing on the problem of Staro sajmište?

It was in the seventies, when after serving in India, I returned to Belgrade and retired. Then I found myself in a circle of local intellectuals who dealt with that topic and I learned a lot about the history of Staro sajmište. But it was only later that I found out about the misuse of the land. That was a surprize even for those who continually lived in Belgrade. Even they did not know anything about that.

What do you mean by misuse?

Selling pieces of land to physical persons, the existence of the restaurant and the in-door tennis court. The restaurant and the tennis court are temporary structures that can be removed easily. The authorities must finally deal with it and make sure that the entire location is protected in terms of land use. Furthermore, engineers in charge of drawing up plans must be named and everything should be duly rebuilt.

You want to reconstruct the buildings that stood at Staro sajmište?

Yes, we are thinking about rebuilding the former structures to look exactly as they used to. Staro sajmište was a masterpiece of early 20th century architecture and this is what it should be again. Naturally, the space should be used for other purposes. We don’t need exhibition pavilions or trade halls there. What we do need, for example, is an education-oriented space. The site is huge and if all exhibition pavilions were to be rebuilt, there would be enough space for schools, exhibitions and museums. This is what Belgrade needs. Belgrade has the city museum with numerous exhibits, but no exhibition space.

When was this initiative launched?

Serious efforts began in the 1980s. I know that over the last few years we have been saying over and over again that the right time for something to happen has been ever since the 60s. But no progress has been made as of yet. An now, given the global economic crisis, I’m afraid that it will take at least another five years to set up an engineering team that would draw up plans for the rebuilding of the former exhibition pavilions.

How does the city react to your proposals?

They kindly reply: “Yes, that is part of our agenda”. But as soon as the talks get serious they say: “Yes, but we have no money”. However, we need that, it is a civilizational issue. In the whole of Europe, concentration camps have been turned into memorial complexes, but this one is still a dump.

What do you think about the initiative promoted by Veran Matić to establish a museum of tolerance?

The site is too big for one museum only. And what exactly does tolerance mean? What kind of tolerance do we foster? Our association has never talked about tolerance but about a memorial and a cultural centre, something that would be alive. It could also be part of a university or a conservatorium and embody things that belong to the domains of culture, art and science, in short, an education centre.

Therefore, a place that would make people better persons?

These are dreams. I never allow myself to have such dreams. I’m afraid that a new world war will break out in the next century. I’m basically an optimist, though. Then again, I also thought that it was impossible to destroy Yugoslavia.

The interview was conducted by Dirk Auer in 2009.﻿