The multimedia map on this website is a representation of the history and present of Staro sajmište (Old Fairground), in Belgrade, where the German Gestapo established a concentration camp in 1941. The map is a result of interviews with a number of individuals connected to this place and its history, and it was created after young researchers from Serbia and Germany had visited Staro sajmište in 2010. 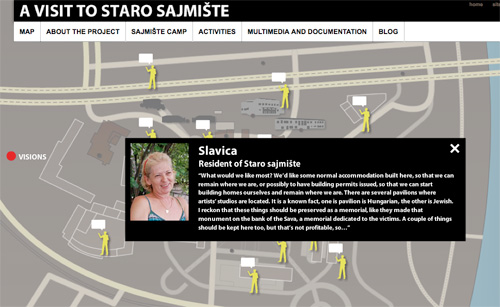 The spots and buildings the researchers came across first while visiting the location, as well as those the interviewees talked about the most, dominate the map, which illustrates a multitude of overlapping perspectives, but still leaves certain spots unelaborated and incomplete. In addition to the memories of former prisoners relating to the time of the concentration camp, the website also features discussions about the present situation and the future of the place, thus shedding light on the attitude of today's society towards the crimes of the Nazis and their collaborators.

The map is not completed and should be looked upon as a public call to those who could add what has not yet been shown, heard or written there. The material to be found in the website info section provides the basis for further research. This section may be updated by adding new material to the content already featured, which includes documents and further reading about the Sajmište concentration camp and fascism in general, as well as the web links to and addresses of relevant institutions.

Traveling towards the center of Belgrade across Branko's Bridge (Brankov most), only a mindful viewer will notice the crumbling tower to the right, surrounded by houses and barracks on the Sava riverbank. People who live and work there know that they are situated on the spot of the old fair from 1937. However, only few of them are aware of the fact that the German Gestapo turned the fair pavilions into a concentration camp in the end of 1941. Sajmište, officially named “Judenlager Semlin” (Camp for Jews Semlin), was one of the first places in the whole German occupied territory, where the Jewish population was systematically killed in a gas van in early 1942. Later, in the system of Nazi concentration camps, Sajmište was used as a central transit camp for prisoners who were deported from South Eastern Europe to the labor and extermination camps in the north. (1) 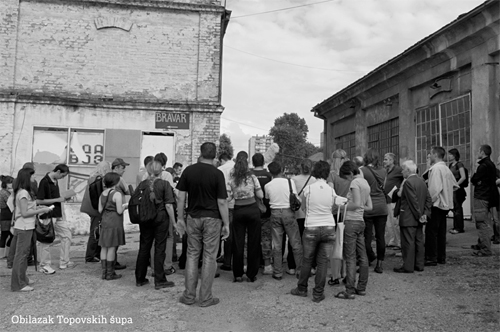 The question of how the history of Belgrade’s “Old Fairground” (Staro sajmište), should be addressed, has been raised several times over the last decades. But for a long time there was only an insignificant plaque in memory of the victims of the Nazi crimes.

In the eighties, the area of Staro sajmište had been put under monument protection, although nothing was undertaken to preserve or renovate the site, while the Yugoslav wars of the nineties brought new attention to the area and its history. The memory of the detentions and mass killings of Serbian civilians in the Croatian fascist Independent State of Croatia, with thousands of them transferred from the Ustasha camp Jasenovac to the Nazi camp Sajmište was emphasized. In 1995 “The monument to all Yugoslav victims of genocide” was erected at the river side next to the former camp grounds. At the moment, the days of the site with its post-war emergency housing, small businesses and artists' studios seem to be numbered. Located in Belgrade’s central area, it is one of the best pieces of land that has not yet been sold to investors. Capitalist economic transition and a moderate boom in the construction industry have shifted Staro sajmište to the center of large economic interests.

While for the public the past and future of the place remain hidden, politicians are trying to find a solution which connects commercial use of the site and the memory of the camp. It is this threat of commercialization of the old fairground that gave the greatest stimulus to various groups to formulate proposals for the establishment of a memorial complex. However, a fierce dispute in the society over the narrative of the anti-fascist struggle, the controversy around the meaning of the Holocaust and the polemics about genocide, fend off a possibility of drawing a line under this period of history and arriving at a social consensus.

In July 2010, the initial multimedia research “A visit to Staro sajmište. Nazi concentration camp Sajmište” was held. It was initiated by journalist Dirk Auer and artist Rena Rädle, in cooperation with Cultural centre Rex. Students from Germany and Serbia had explored the Staro sajmište site, interviewed historians, researchers, current inhabitants of Staro sajmište, initiatives' and victims' association's representatives, who demand the building of a monument or memorial complex at Staro sajmište. Historical facts on the concentration camp, the sphere of memory, as well as the expectations for the near future had been mapped. The research results were published on the website starosajmiste.info, so that the public could have insight into the history, significance and debate about Staro sajmište. With a series of public events called “Seminars for everyone” and public site visits, in the course of 2011 initiators and participants undertook new steps in the debate and practice of remembering the fascist crimes.

The study of the wider historical and ideological context of the Sajmište concentration camp was of the uppermost importance. The seminar “Contexts of the emergence of fascism” dealt with the historical context of the camp and shed light on economic, sociological, cultural and ideological conditions for the emergence and development of fascism. At the seminars entitled “Facts – resistance to fascisms and collaboration – 70 years after” and “Readings – understanding and interpreting historical facts regarding World War II, war crimes, holocaust, and genocide”, experts coming from various fields, critically readdressed the strategies and interpretations of the revisionist and relativist discourses.

Starting with the Sajmište camp, a work group studied the history and visited the sites of fascist terror in Belgrade and the surrounding areas, like the Topovske šupe camp and the mass murder site by the village of Jabuka, as well as the spots of anti-fascist resistance in Belgrade's centre and in Vračar. At public visits of certain sites, the witnesses, researchers, activists, relatives and other interested parties, acted as guides, sharing their knowledge and experience. The essential part of the presentation and testimonies dealt with the reemergence of fascism in contemporary capitalist society, expressing itself mainly through racist, nationalist and other chauvinist, exploitative and discriminatory relations. With their multilayered and multiperspective “self-appropriation of history”, the before-mentioned activities aim to develop emancipatory practice of historical learning and memory, which has an educational, dialogical and processual character. Researching the conditions which produced the emergence of fascism, a historical and political awareness is thus created with the aim to identify and fight contemporary fascist tendencies.

It is a challenge nowadays to develop an anti-fascist practice of remembrance, when there exist elementary misconceptions of the term anti-fascism. In political arguments and polemics that accompanied the bloody wars from the beginning of the breakup of Yugoslavia up to the NATO intervention, anti-fascism had become a fighting term on all sides, and was used to legitimate the aggression against the opponent. With the collapse of communism, the tendency emerged throughout Europe, to erase the meaning of anti-fascism, and together with anti-fascism, the meaning of the term fascism disappears from the consciousness of today's generations. At a moment, when society has not come up with any answer to the emergence of neofascist organizations in Europe, it is essential to analyze the conditions of fascism and to educate about the crimes committed by the proponents of the fascist ideology. It is also necessary to contribute to a new positioning of the concept of anti-fascism through the analysis, that is, the critique of the existing relativist discourse on fascism.

Text by Rena Rädle
_______
The project “A Visit to Staro sajmište – Paths” 2012 is realized at Cultural centre Rex, produced in the frame of Fond B92 and supported by Rosa Luxemburg Foundation.

1 Between March and May 1942, around 6,500 Jewish women, children and elderly, imprisoned at the “Camp for Jews Semlin” (Judenlager Semlin, or in Serbian, Jevrejski logor Sajmište), were killed in a gas van – (“dušegupka”, breath-taker) – on the way from the camp to the mass grave in Jajinci near Belgrade, after their fathers, husbands and sons had been shot during the summer and autumn of 1941. In the “Detention camp Zemun” (Anhaltelager Semlin), about 32,000 people were interned; 10,636 did not survive. Considering the conditions at the camp, historian Milan Koljanin claims that it was a de facto concentration camp. See: Milan Koljanin, Nemački logor na Beogradskom sajmištu, Institut za savremenu istoriju, Beograd, 1992.